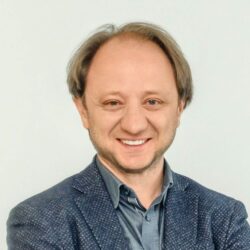 Graduated in Moscow state of Economics, Statistics and Informatics in 1999 with a degree in computational and applied mathematics, pursued PhD in math research but dropped out when landed a job at Swedish based Hansa Business Solutions where he was in charge of business development in Russia and Ukraine. Worked in western companies in various roles till 2005.

In 2005, he joined the Moscow office of Oracle Corporation, where he was in charge of mining and steel industry and later got promoted to a manager in the Public Sector department. Joined an anti-Putin force in December 2011 during Bolotnaya square.  Left Russia in July 2012 in the wake of forged and minted criminal cases against his close friends.

While settling in the United States, he graduated from the University of California, Berkeley with a master’s degree in business. He launched his own company – Pi5 – a big data research agency that excels in capturing, storing, managing, and analyzing the influxes of billions of records per day using a top-notch cloud platform.